Armoured Commander is the videogame equivalent of a book. A good book to boot. Not least because its’ graphics are completely ASCII- but ’cause when you’re in the thick of it, shuffling injuried crew around a cramped soviet metal coffin across the finnish tundra while under heavy fire, the opportunity for emergent, custom and personally driven narratives is at its’ peak in the wargaming scene. Armoured Commander II is an early-access proud rogue-lite based around the misadventures of tank commanders during the Second World War with every campaign, map, terrain features, objetives, units and encounters procedurally and randomly generated, offering a shit-ton of replay value.

By the time I’m writing this, the early access ArmComII is jam-packed with content with 12 early WWII campaigns mainly focusing on the germano-soviet sandwiching of Poland. The russian misadventures in Finland, the Reich’s less than friendly Tour de France and of course, the sandy scuffles across north-africa between desert rats and foxes.  Eastern front veterans will find themselves disapointed by the lack of opportunity to rack up soviet accolades and turning themselves into human iconostases. Fear not, comrade for not all is lost! If Gregory Adam Scott is to be believed then by summer 2021 aspiring armoured head honchos will be rolling around North Africa, Eastern Europe, Italy and Western Europe as British, Germans, Italians, Russians and Canadians in their respective lead-spitting hot rods with the necessary mechanical nuances and gameplay bits to fit. 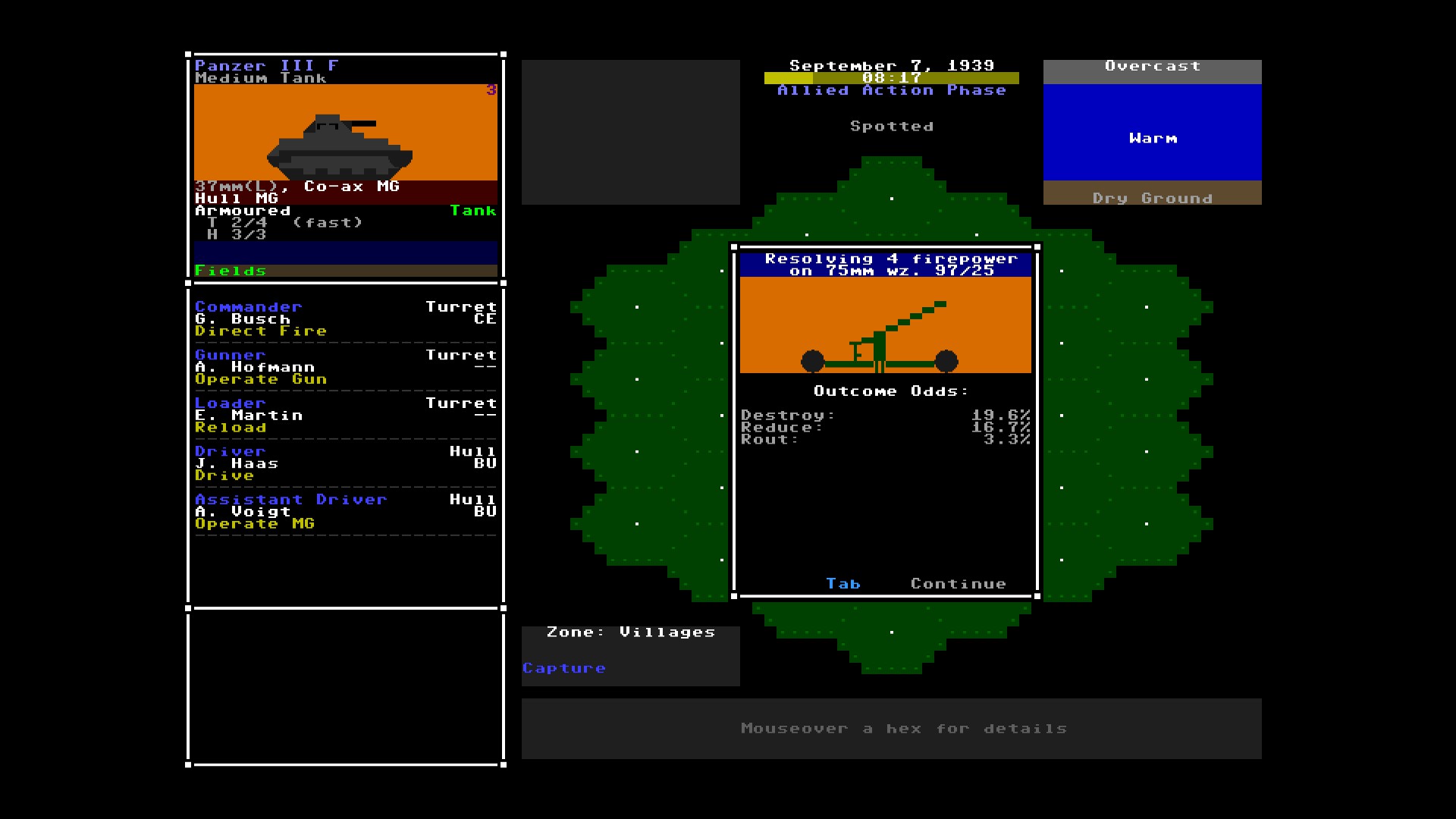 Aspiring chariotiers, world war afficionados and book dwellers looking for steel-casted treaties won’t be disappointed when exploring the zoological diversity available in ArmComII- one that far strays from your typical Panthers and Tigers. Fight desesperately within the bolted-on together TK-3 Polish tankette and its variants, including 1 of the 24 produced carrying the Nkm wz.38 FK 20mm machine gun. If getting slapped around by germans in a small tanky-tank isn’t really your thing you can always try getting smacked inside a Vickers based 7TP light tank. Drive the totally inadequate Fiat Ansaldo M11/39 italian chunk of backyard scrap. Personally, I found myself disapointed when discovering that French tanks really didn’t had rear-view mirrors for scouting the frontline while they retreated after spotting the usually absent monstrosity blindée Char B1. Russians and the stalinium-built T-28 land battleship feature prominentely in the early war-scenarios. Dozens of different units pepper the hex-based battle locations each with its own pre-historical ASCII representation. 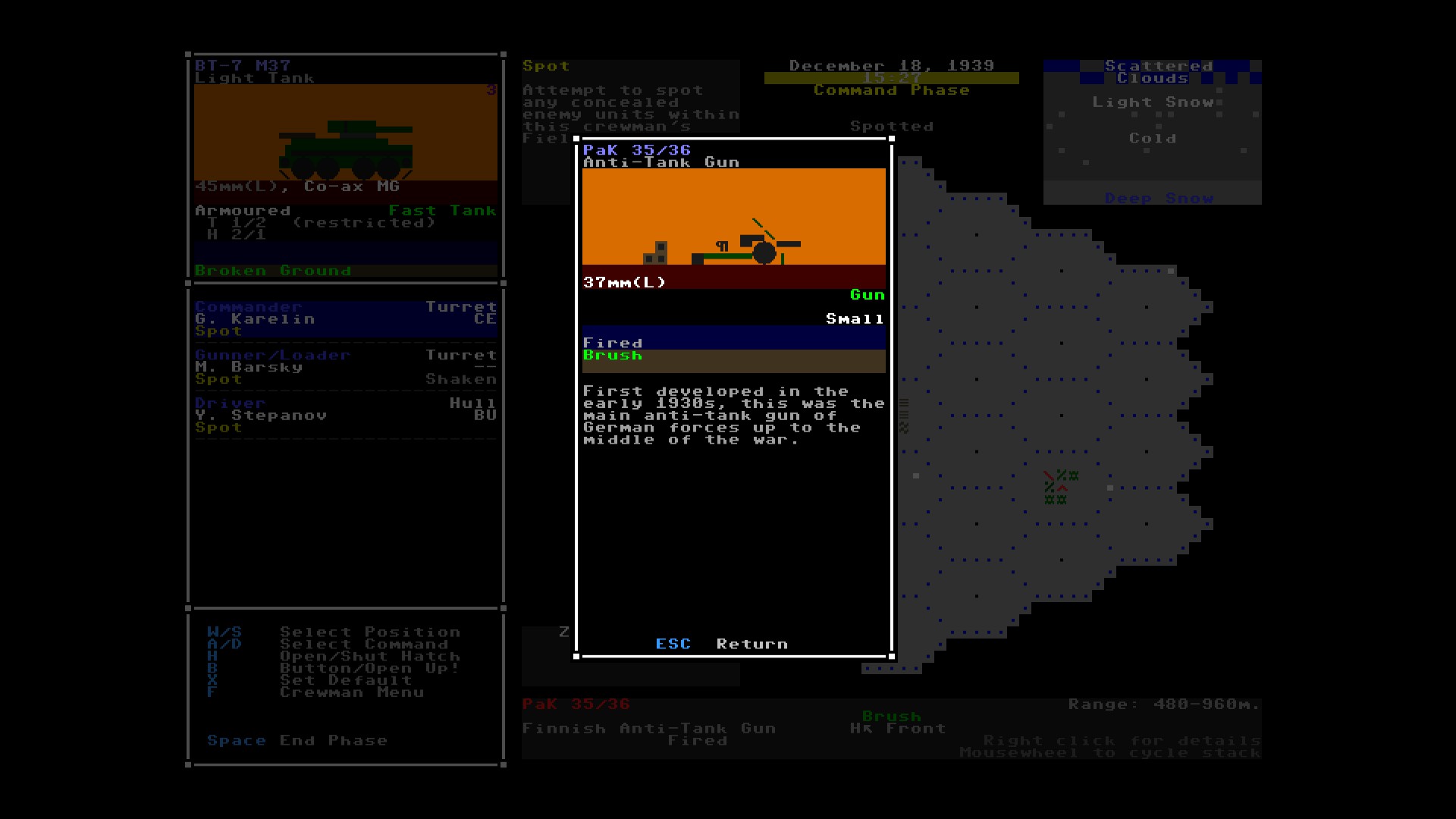 I like big arsenals and I cannot lie but how does it play? After selecting a campaign, it’s lenght and a Grubbers little tank of your liking the player is assigned to an hex of a gorgeous randomly generated sub-operational level map and tasked with capturing strategic relevant hexedery across a day of battle, so no lingering around waiting for your pixeltruppen kameraden to win the day for you. Each movement into adjacent hexes shaves away at the clock. Difficult to treck terrain takes longer, additional actions such as asking for artilerry, air support or recon will wind up the clock even faster, asking the players to trade helpfull helps from helping folk for precious clockwork.

“Enough of this! There’s a war going on after all! Tell me all about the savage slug slinging that goes on in ArmComII” I hear you, dearest reader. I hear you. Combat is processed in an amplified version of the hex you’re in. The operational map turns into a tactical version of said hex. Let me show you. Above operational. Below tactical. 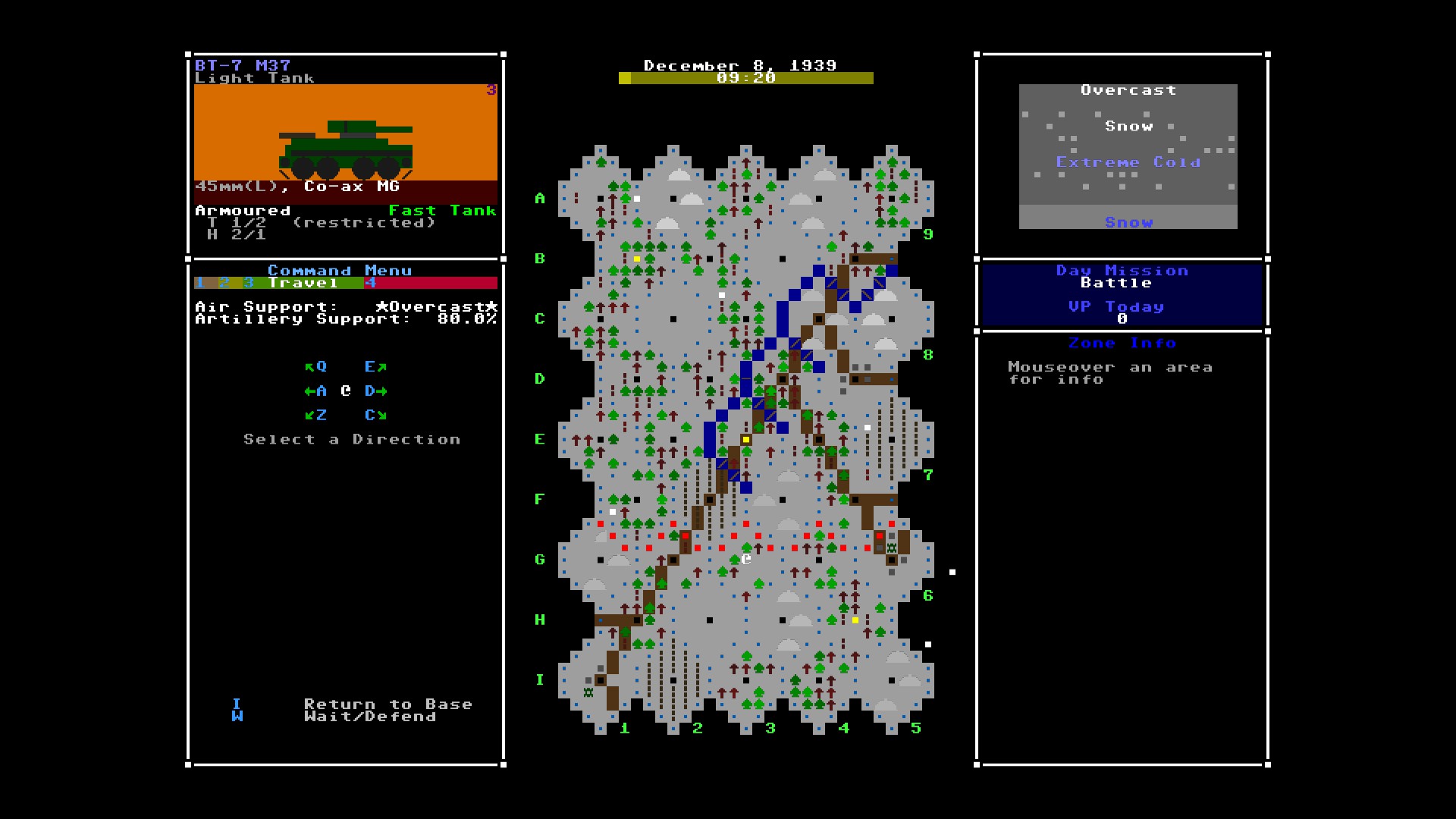 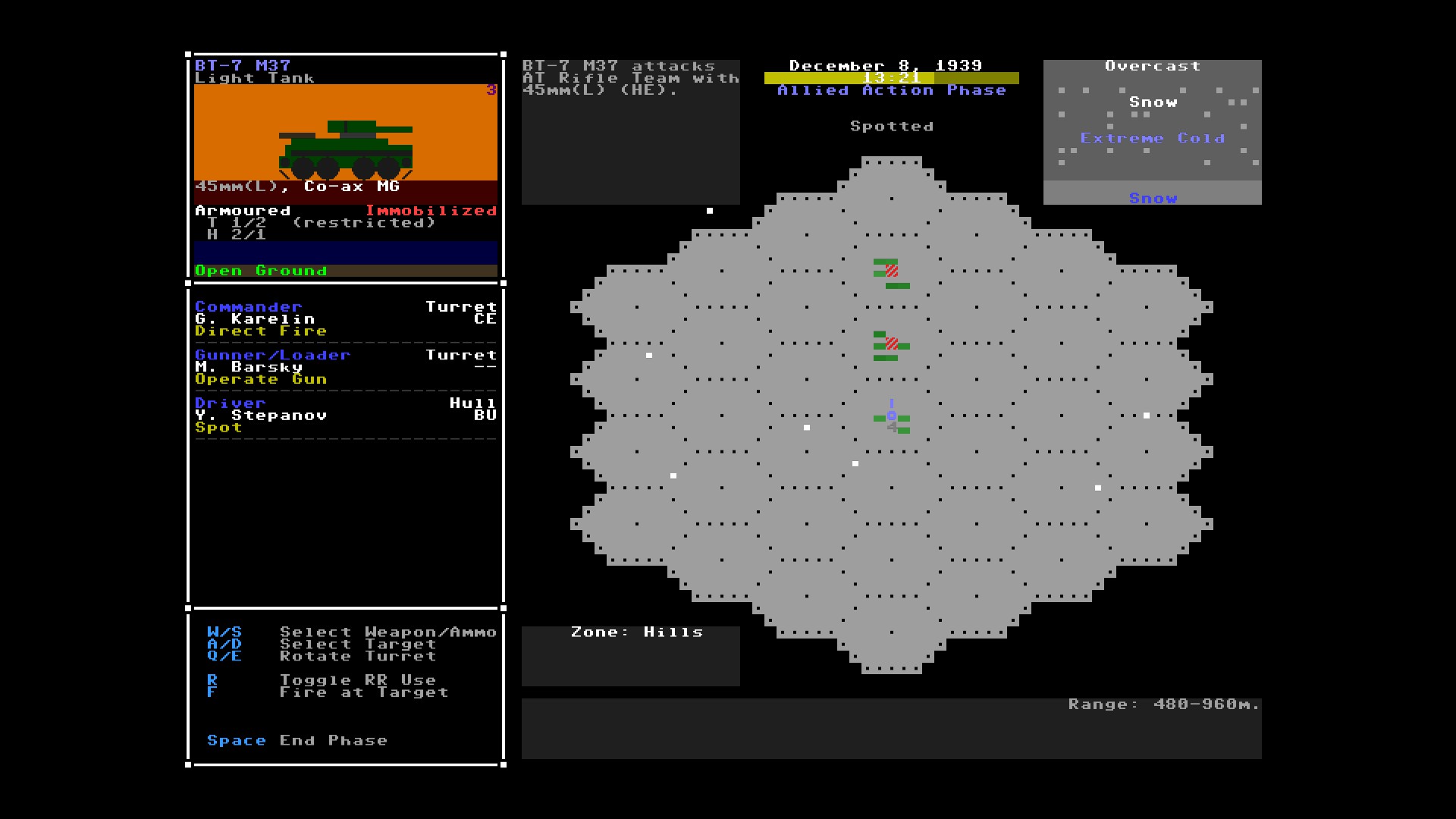 You’re then tasked with outright killing or routing the enemy forces. You do this by assigning tasks to your crew, each of which, being as individuals as a megabyte can be have their very own perks and quirks which you can level up and evolve across different maps and campaigns. Distinct tanks have different number of troopies inside, each performing tasks related to their roles. The commander mainly commands by directing movement (which is the same to say that it gives a bonus to a successful movement roll dice), and directing fire (by doing what? You guessed it! By increasing the chances that each round exiting the barrel of your panzer hits the intended target). Basically: the gunner guns, the loader loads and the driver drives. What is making instead of breaking ArmComII is the amount of interesting choices and stories in between. Overrun or move into cover? Hatch wide open so that coordinates come easy and enemies don’t escape visual range? Take a risky shot at that life threatening AT gun or let it live in order to machine-gun down the infantry squad closing in on you? Or hatches closed and the peril of having grenades lobbed through various holes suddenly declines? The main gun breaking down, the tank malfunctioning, crewmembers getting injured or dying, surprise flaking attacks and impossible dice rolls turned possible. ArmComII is at its best when everything has turned south yet your objective is up north.

It is the satisfying result of overcoming seemingly impossible odds and mastering all the tips and tricks within the game systems across several runs that makes its rogelite aspect not only acceptable but rather welcome. I usually dislike procedural and randomly generated content but the wide scope of the war you’re in, the lack of a meta-narrative and its focus on small scale units combat with a simplistic graphical style and the fact that you’re just a small piece in a bigger than – life-conflict is an interesting combination in each procedural and random content truly adds a new layer of plausibility to what’s going on. Iteration, experimentation and learning.

No matter how positive of an impression the game makes upon those who played it, the artstyle requires some getting used to, the game inner workings require some experimentation through failure and that might sour some tastes. Also, its engagements not being necessarily real, historically accurate battles might struggle to capture the interest of the purist crowd.

“With a satisfying pressing thud of the TAB button a round goes whirring down the finnish tundra. Half a mile away to the south of our BT-7 squad location , hidden between the heavy-knit, near impenetrable snow-ridden layers of deciduous trees lays a single entrenched PAK-35/36 manned by 2 stuborn Suomalaiset. The round whisks by so near that the kinetic force alone is enough to offset the delicate whitey tree-tops and have them abandon their posts”. I mentioned that this game is like a book and an explanation is due, but I the simplistic graphics forces the player to contextualize and picture entire campaigns in its head, as abstraction leads to imagination. To me, this is what ArmComII does better, by being not only tactical in a military sense of problem solving, but but by also tugging at those dorment, hidden locations within our brains that stimulate imagination. I’ve read that understanding a game in this artstyle is like slowly turning into Neo from matrix, creating scenes from strings of letters and numbers. I would argue that it’s more like reading a book, where you create your own mental image of what you’re reading.

You can buy Armoured Commander II for less than your average lunch here.