Did Diablo III finally launched the “SuperMarket Clerk” class? Ohh, no? Well, I’m glad we have Moonlighter then.

This is a shop-management game with some dungeon crawler sprinkled on top with a touch of lite-rogue. You play as Will, the world’s most badass clerk: store owner by day, monster buster by night. A game wherein old ladies will buy 7 pair of lenses and crafting materials for God knows what for 800 gold coins, thief’s will shamelessly try to steal your store 3 or 4 times a day and your insomniac and workaholic character will never get a night of sleep and is fine with it. 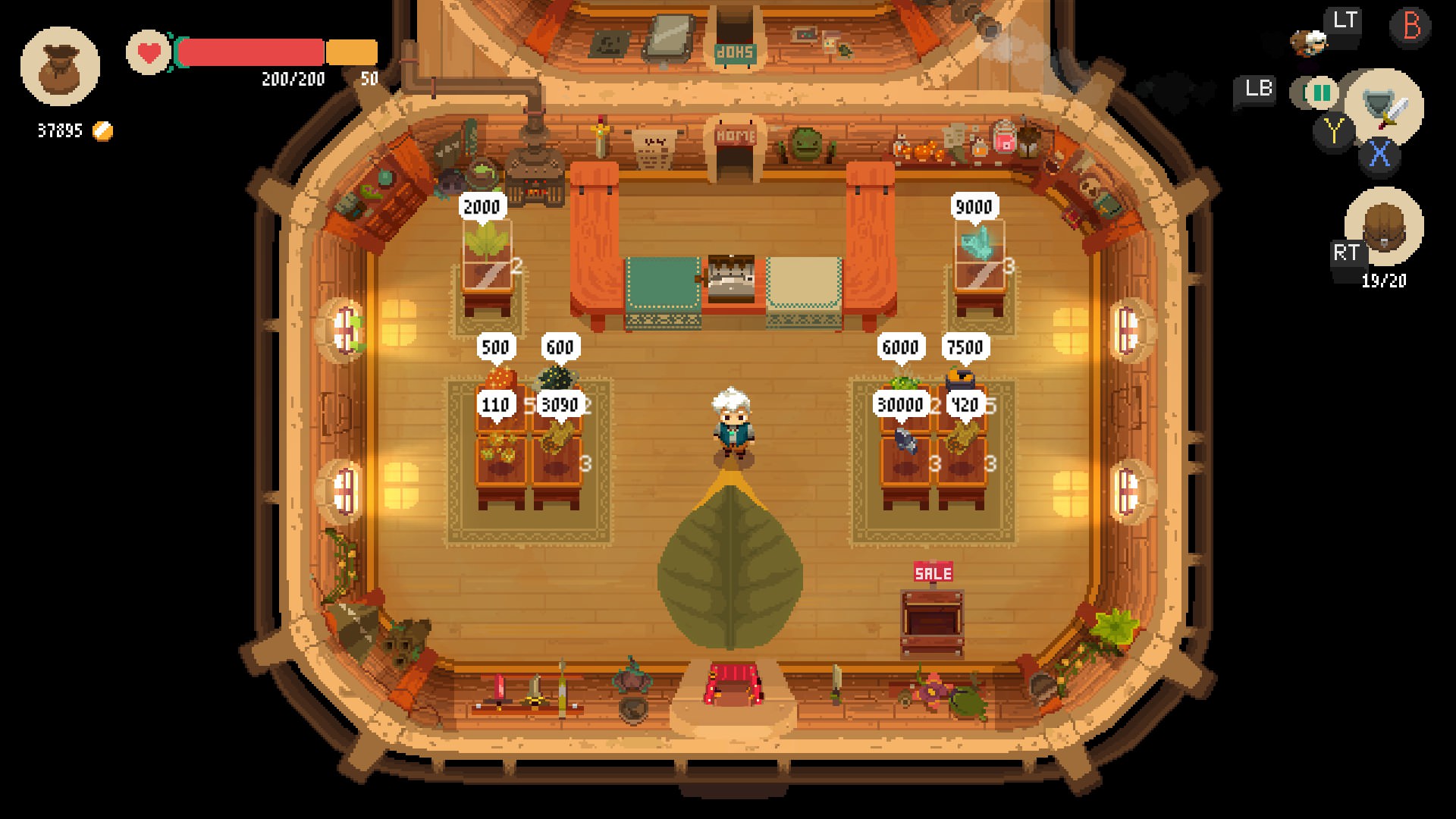 Have in mind i’m currently at the second dungeon of the game and I haven’t seen it all! So take my opinion with for what it’s really based on, first impressions.

In a genre so rarely seen, whose captivating ideas are usually let down by their lack of mechanical intricacies and depth in both management and combat, Moonlighter is a rare gem despite being no exception. While at times it can be a victim of its simplicity that might be very well the reason for its charming appeal. It’s a game with the size and depth of a dog’s water bowl. But it’s the kind of bowl your dog loves and you’re just happy he loves it and you love it too.

As Will, you inherited a store, and as the last remaining member of your family, it is your task to bring it back to its former glory. You inhabit Rynoka where aeons ago 5 mysterious dungeons showed up. With them mighty heroes from all over the land flocked the place in search of glory and riches. The small town flourished. Then it all went south and you’re the one exploring the dungeons in a very old and decadent Rynoka. The story is nothing to write home about and it serves mainly to explain the very basics and contextualize the world you will inhabit. In 10 to 15 minutes you’re gonna be running around fighting cute, pink goey monsters and bringing stashes of loot to sell at your place. 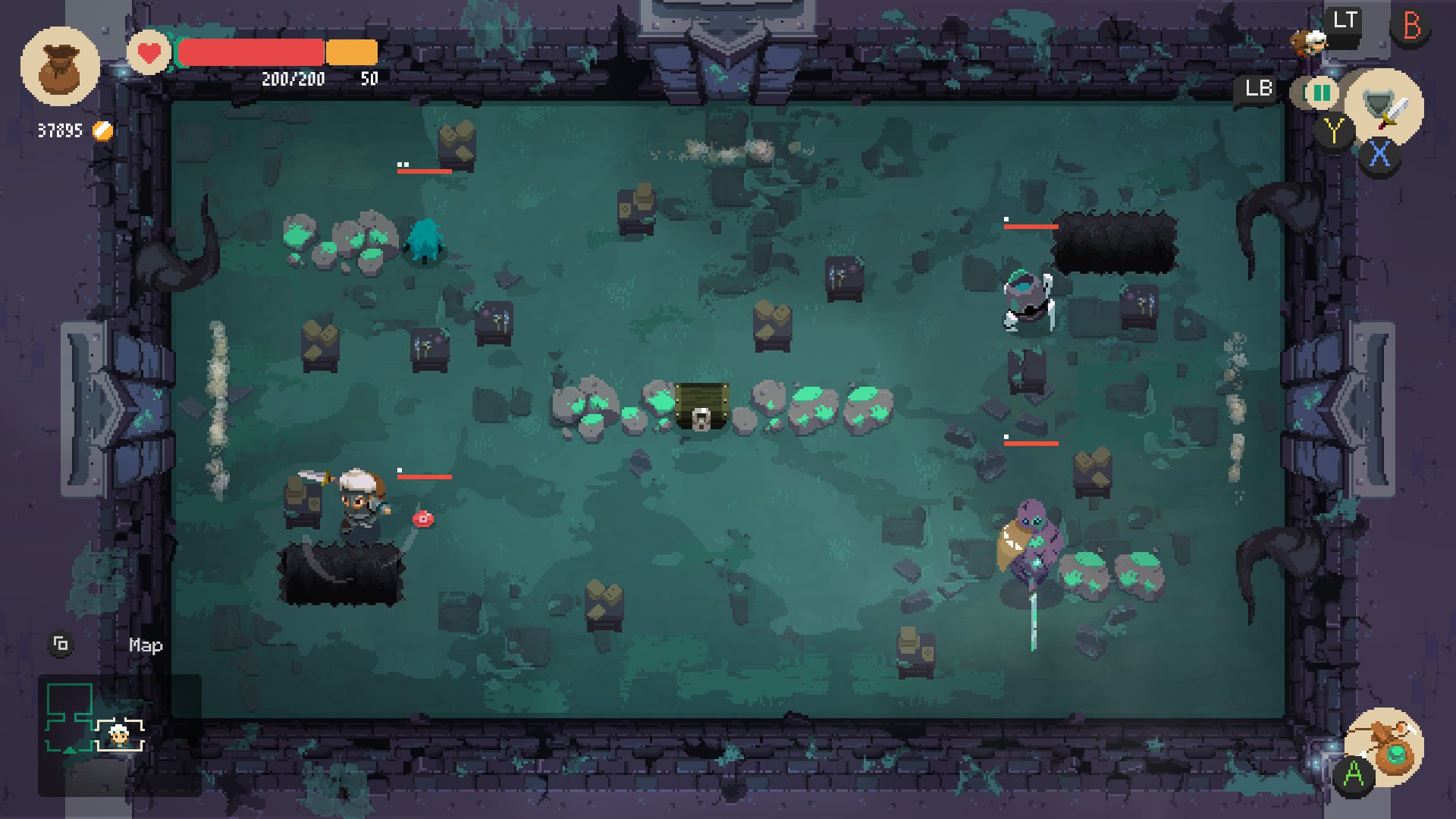 As the world most notorious clerk, going through the randomly generated dungeons (which are pretty much a set-base of templates that are randomly mashed-up together) is where you will spend most of your time. You will fight monster along your way to fight a final boss that will unlocked the next dungeon. Weapons all act differently from one another, with two basic sets of moves: a quick attack or a charging one/shield. You will dodge enemy attacks and there’s not parrying mechanics from what I’ve seen so far. Combat is very straight forward, you will whack at your own discretion until they die, or you do. As soon as you get the fighting mechanics under your belt the game does very little to surprise you outside of new monsters and boss battles. But I can’t say I didn’t enjoy the feeling of anxiously trying to finish a dungeon, so I could bring better loot to my most loyal customers. Don’t get me wrong, the game is tough!

The better you are at sword swinging, arrow flinging and spear thrusting the more you will progress and with greater enemies come greater rewards. But with greater rewards come with bigger risks. That is due to Moonlighter making use of a unique inventory system in each some items come with some strings attached. It either must be placed in a specific place in your bag, or it is going to destroy the item next to it if you return to base, or it must be placed in the middle or at the top or bottom. Items with different kind of limitations can’t be stacked up either, so a lot of decision making goes into considering what you want to take back to stock your shop. 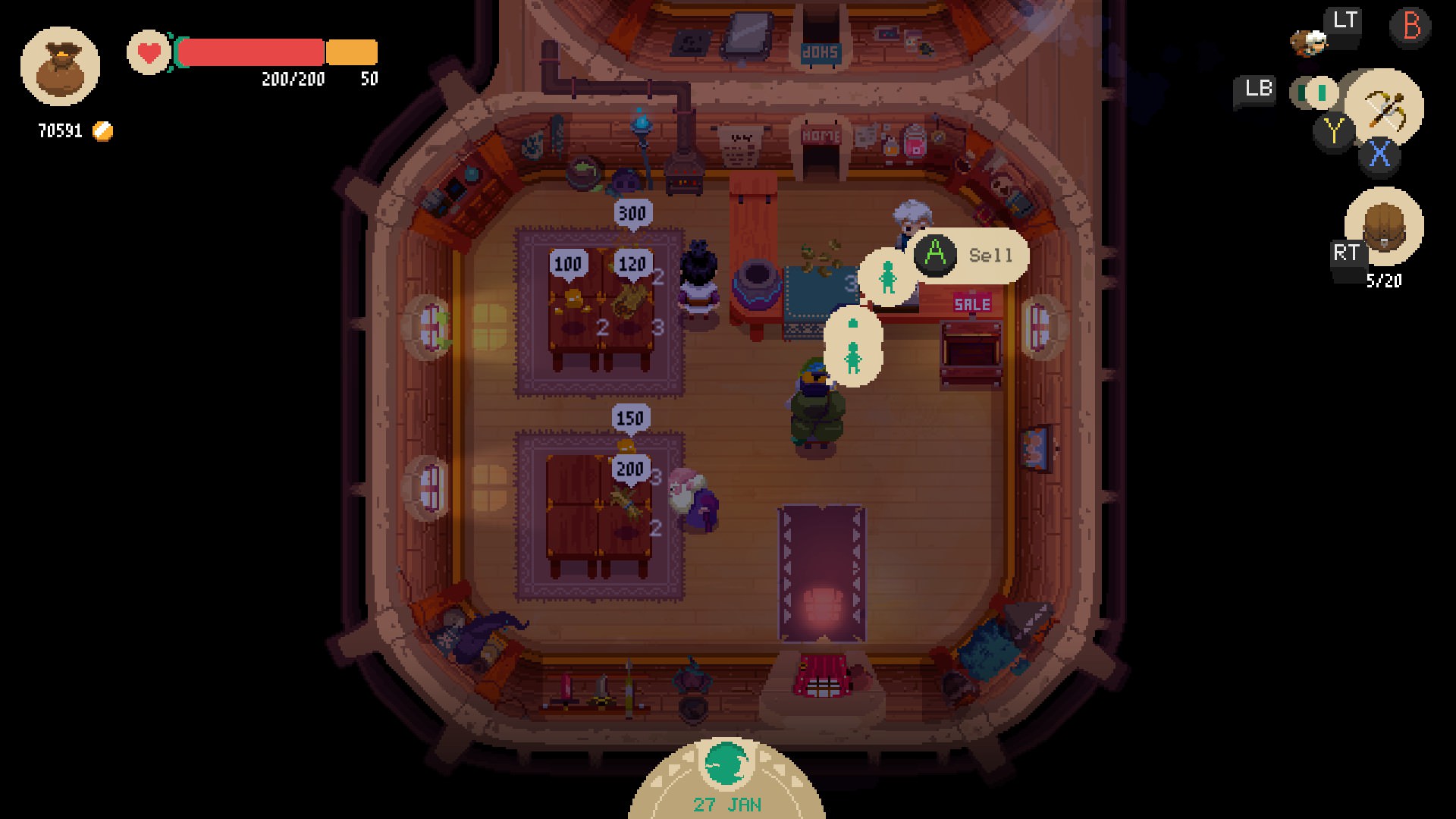 And this is where the game shines: shop management. You must only do a small set of action in your store. You need to place and display your items, price them and going back and forth between the register and stocking your shelves. Customers will pour in with their wallets, but only if you have your pricing skills nailed down. From what I was able to observe, displaying your items in certain ways to attract certain costumers and haggling are non-existent. What Moonlighter does is giving you feedback on how well a certain product is doing in the market and on how customers are reacting to your prices. If you supply too much of a single item, you will flood the market and demand for it will fall, forcing you to drop the price and wait for it to stabilize again. If supply is low and items are on high demand you can even high-price it and costumers will reluctantly pay to acquire them. The store progression so far has been pretty much straight forward, offering you more display spaces and more costumers’ per-store. But I haven’t finished up the game, so I have no way to know if it’s going to get more in-depth, but I really doubt it. Despite being simplistic, it’s always chaos in the store, and having to go and be everywhere at once to stock your shelves again and change prices while costumers are pilling at the register keep you occupy for pretty much the entire day until the shop closes or you end up out of stock. 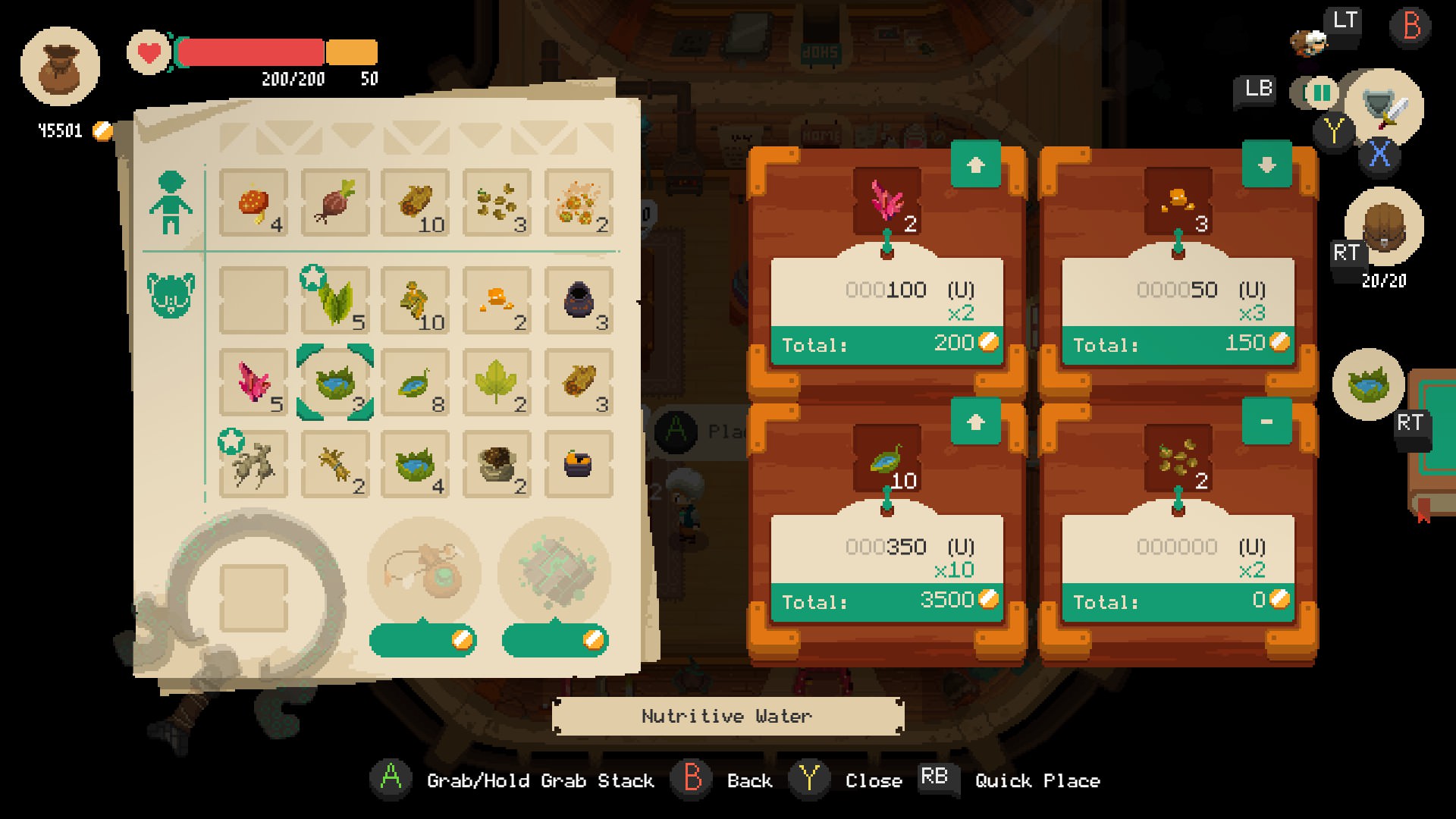 Unlike games such as Stardew Valley or Harvest Moon, it doesn’t seem to have any kind of specific quest system other than “do this dungeon, bring loot, sell loot and go get more loot, upgrade your shop so you can sell more stuff, unlock other vendors that offer you services and buy stuff from them, so you can do more dungeons and bring more loot to sell”. In some cases a couple of shop-goers might ask you for you to bring them X item in Y amount of time, so there’s that.  In most cases I would say this is a shame and it would feel like wasted potential and I would be damn right about it, but in Moonlighter I’ve learned to appreciate the feeling of not having any thing constraints and I’m loving it.

Moonlighter never hides its simplicity or pretends to be more than what it trully is. With no quests, no time-limits, no money constraints, a straight forward combat with semi-randomly generated dungeons, streamlined and fun to interact store management, Moonlighter is just cheerful, light hearted, relaxing and satisfying fun and I can’t recommend it enough.

You can get Moonlighter in Steam for 19.99EUR or your regional equivalent. 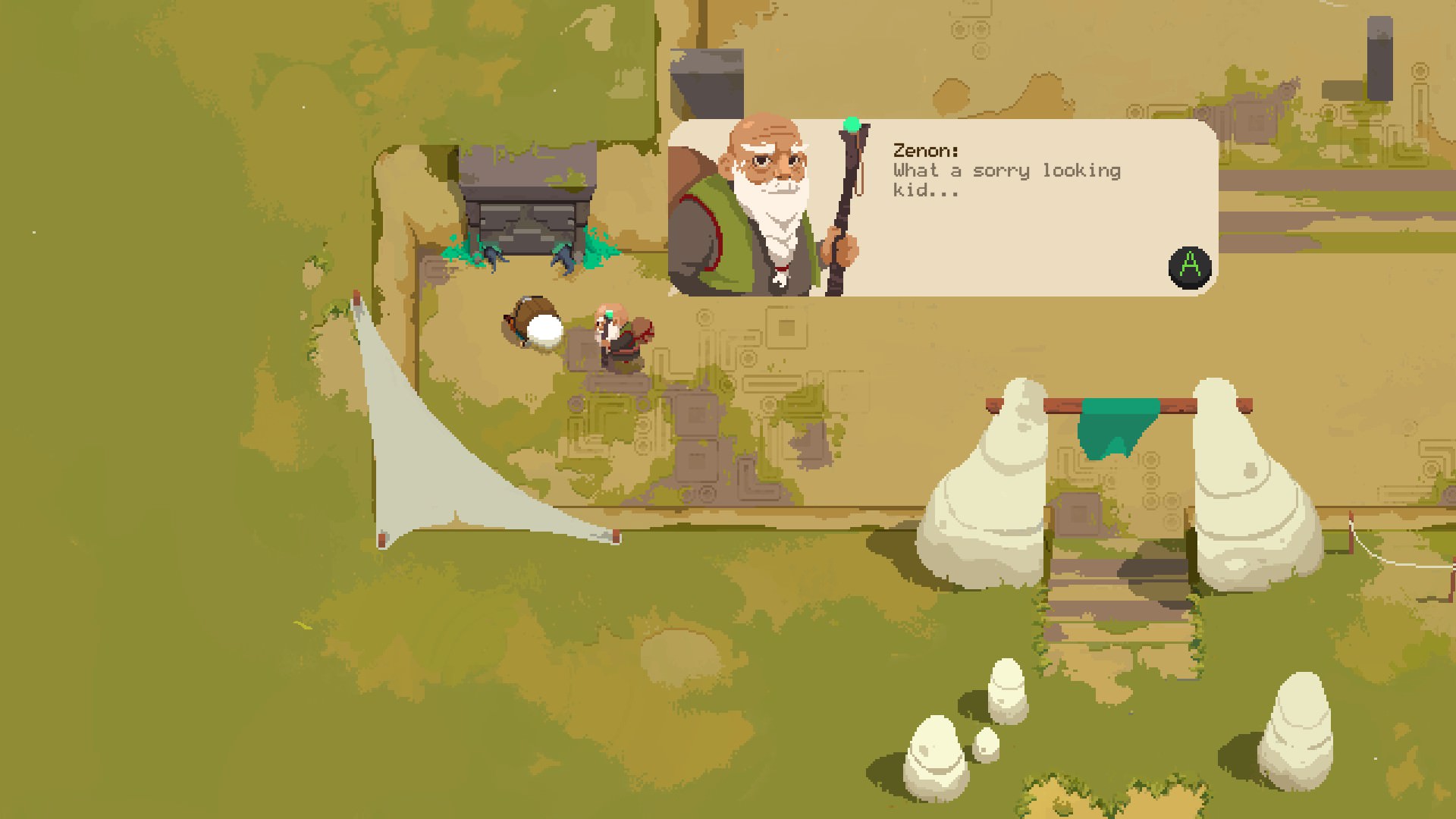