Vikings+Norse loving fans rejoice! After the release of Thrones of Britannia and Northgard, a new Viking clan named Destructive Creations has arrived at your village, ready to raid hours of your life with the deep tactical goodness of Ancestors Legacy!  They’ve spent the last years working in the fjords to put together a really delightful real time tactics game based in the Dark Ages of medieval European History mixed with a mechanical pinch of Company of Heroes and powered up in great graphical detail by the Unreal Engine 4 technology. A bit iterative here, a bit derivative there, Ancestors manage to sucessfully adapt the CoH formula into something really unique with its visceral and cinematic combat, with a somewhat deep tactical squad based combat that takes a sub-genre that’s been somewhat stagnant since CoH established itself in 2006.

I’ve been playing the campaign and have spent around 6 hours with the game since yesterday, so take my opinion/experience as you wish.

CAMPAIGN STRUCTURE– So far it has revealed to have a surprisingly large amount of variety. You begin your first mission by raiding an outpost and when things go south you are forced into the dark woods for a small stealth section, you go all the way up through this first act until you finally manage to raid an abbey. The game has been using the campaign to gradually introduce new mechanics. By encircling the outpost you learn the basics of combat movement such as charge and flanking, you get an understand about  units’ stances such as defensive and offensive. With the night scene you learn the mechanics of FOV and hiding. Then you are introduced to the idea of creating traps (which are essential for a successful ambush), then to unit upgrades and base building. So far the campaign has been serving its purpose as slow yet big challenging tutorial, giving you the tools but rarely the solutions. I missed this, so I’m enjoying it and can’t wait to go back and finish it. 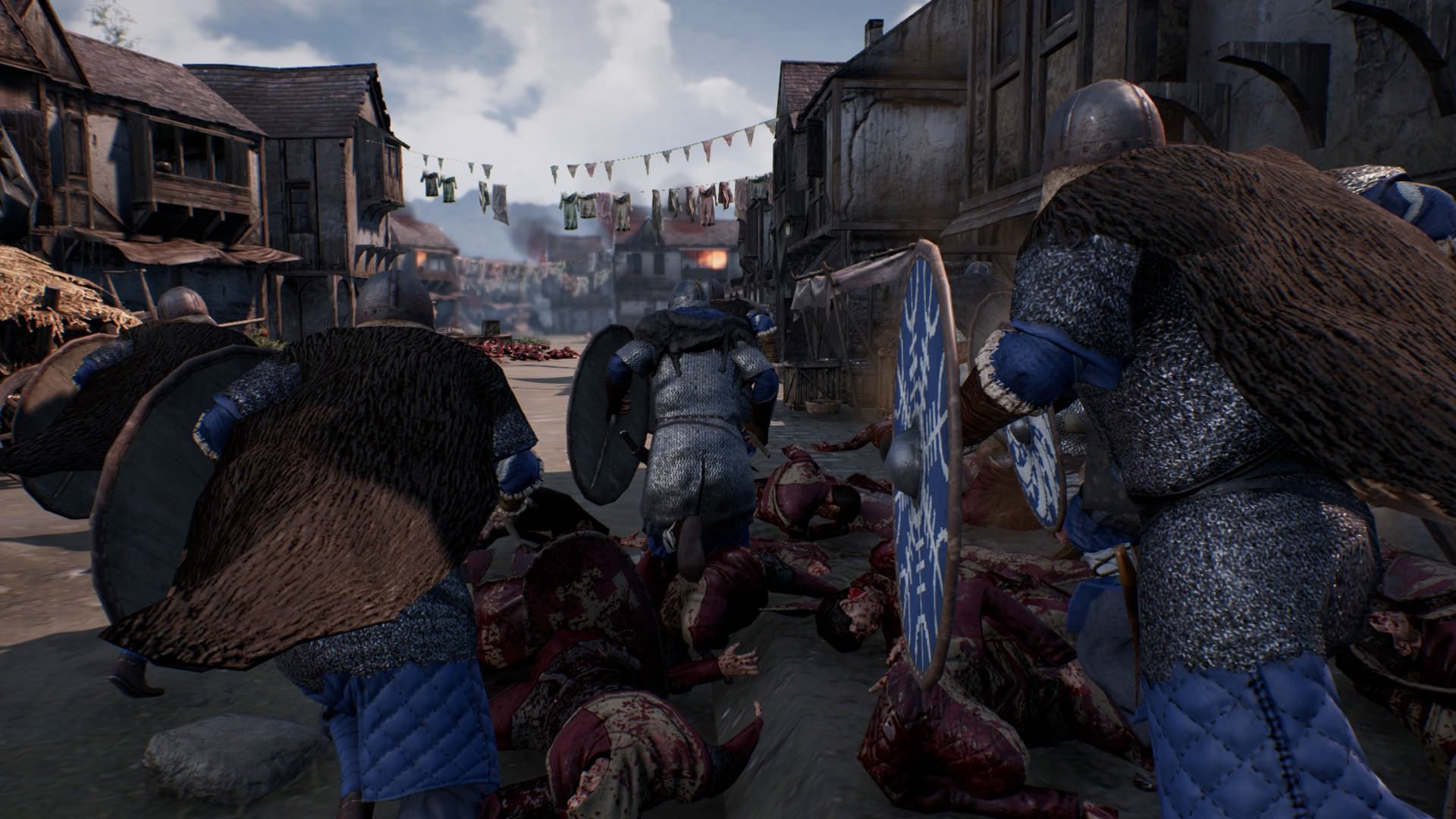 TERRAIN- Terrain plays a huge role in this game, with tall grass and fields allowing you to completely hole up entire clusters of units there and use the element of surprise to flank and encircle enemy formations. Chokepoints with defensive stance shielded units allowing you to stop entire armies and turn them into mush. Terrain elevation will give you and your archers an edge in fighting the enemy. When units are evenly matched the outcome of a skirmish will mainly be determined not only by how good or well equipped the units are, but how crafty you are at choosing where to fisticuffs with your foes. The maps are really interestingly built with chokepoints, roads, tall grass, rivers, forests, housing and plenty of opportunities for emerging gameplay. And it looks gorgeous 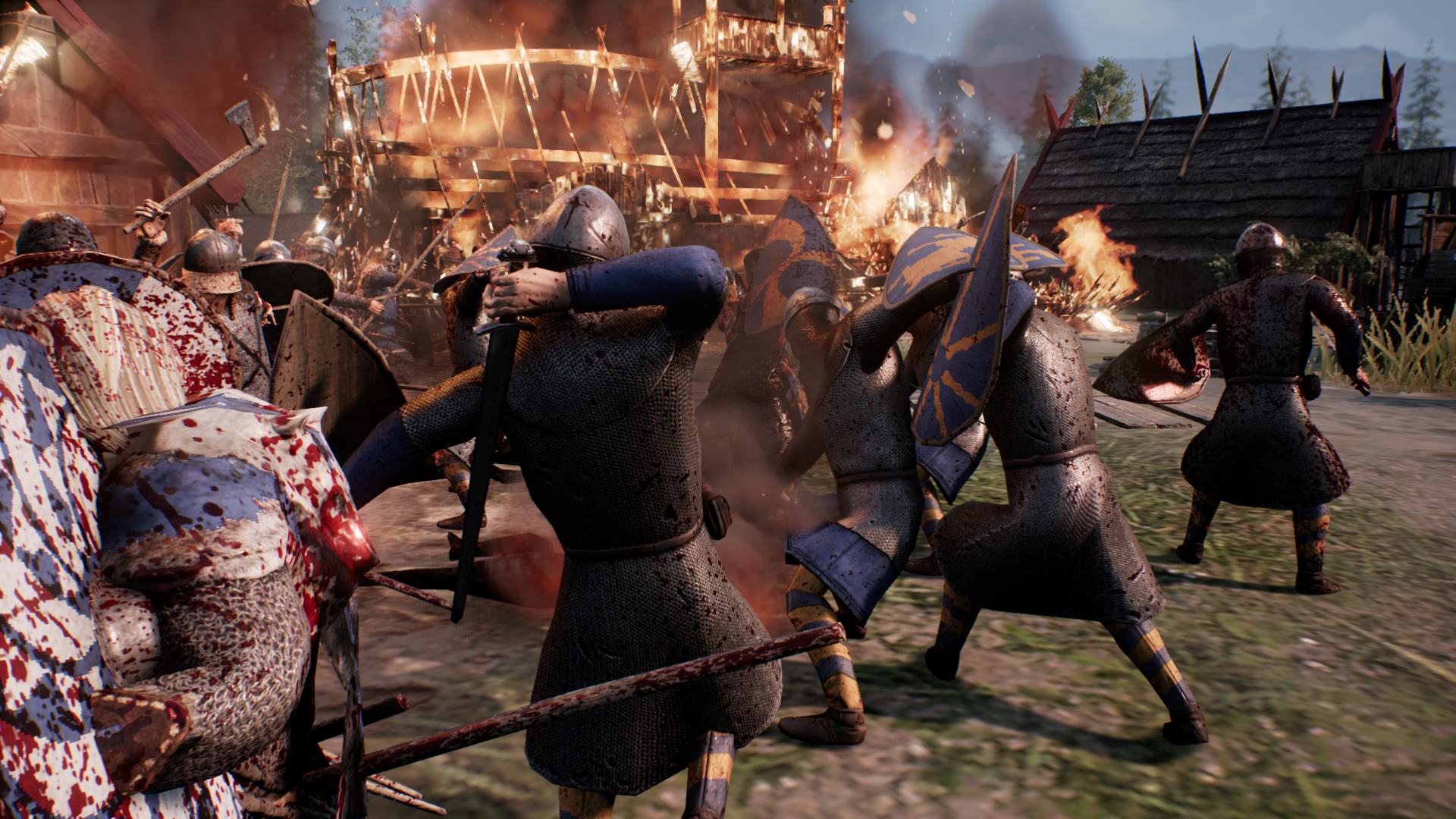 COMBAT- Combat is brutal in this game. It’s cinematic, atmospheric and bloody as all hell. But more than that, it’s been really interesting fidling around with it. Usually, melee based strategy games turn into one of two things: High speed continuously charges with cavalry (yes, i’m looking at you total war!) or stacks of doom that engulf enemy formations and club them to death with sheer force of numbers. The limited number of units in Ancestors means that will hardly happen and that with matched forces you can’t disconnect terrain from combat and I truly fancy that concept. It’s not all about how many units your barracks can output per minute, how many arrows you can chug down range or how many swords and pikes you bring to the battlefield, but on considering which units to bring, envisaging where do you position them before the fight, and on how well equipped your armies are. Units will also counter each other, with some being stronger against one and weak against other, your typical rock paper scissors kind of system.

Here’s a story about a skirmish: I defended a road that lead to one of my recent captured villages against superior numbers by just building a trap in it, waiting for the enemy to fall, have my archers suddenly rise amidst the tall grass and fire upon the remaining survivors while my shielded men engaged them from the front and, once engaged and pinned, both of my spear units flanked the remaining enemy forces, encircling them. It’s so satisfying to see a plan like this come together. So far the AI has been really competent for the most part, by choosing the right fights and knowing when they can or can’t win an engagement, by  stepping back forces their forces and harrass you, avoiding confrontation. They won’t let you just keep territory for yourself without contest. I noticed, however they have the occasional moment of stupidity and never retreat their forces after engaging in combat, or at least, that has never happened to me. The other annoying situation is their willingness to trow away their lives again and again without any result by ignoring defensive towers just so they can get on with trowing a couple of torches into your village.

At last but not least, units can be upgraded with better equipment up to three times, from what I’ve seen thus far. Have in mind this is extremely important and a single 3rd tier armour-equipped spear unit can hold the line a lot longer and against a larger, non-upgraded force of the same kind. Each squad member has it’s own health pool and each small squad in the health bar can go from green to yellow to red to display single member status or to black, to show that they have died in combat.

This system is simples yet effective and clear, allowing you to choose with units to retreat to go back and heal and which to keep fighting. It’s all about informed decision, and Ancestors is doing a great job about this. Units also possess unique abilities that you can press mid combat and will change their behaviour, such as chasing to make them run faster, raising their shield to protect against arrows, adopt a defensive formation, fire faster arrows, increase morale, all of that good stuff is here and it’s interesting to use mid combat, just not too intuitive.

That’s where we get to my two problems with the game combat so far, how hard it is to use abilities in the middle of combat as you must press units one by one or select them as a group of the same type to activate certain ability. It’s just way too cumbersome and since they are unique to their unit type, they should just displayed in the bottom right corner of the screen to activate them the same way you do in a game such as CoH.

My other problems are the hero units, they are way too durable and way too powerful and kind of throw some of that planning out of the window as it is easier to charge them alongside a few other units and hope for the best. While they add some flavour and it’s kind of entertaining to see a one man army absolutely destroy a garrison of spearmen it kind of ruins the point of having a lot of the other systems i mentioned.

BASE BUILDING- There is some base building but everything is already pre-assigned for you, it has a very streamlined system where “If you have the resources, you can afford to build it”. A couple of years ago I would consider this to be horrendous, but not right now.  Resources are gathered by raiding other villages and keeping them under your control and assigning workers for pre-existing resource nodes. Imagine COH but instead of a flag, it’s a whole village. You can upgrade your base camp with new buildings that allow you to build new units and unlock new upgrades. So far in the campaign I’ve come across three tiers of technology and I’m not sure if there will be much more. While the base building might seem secondary, I believe it has been left like this deliberately so as to focus you and your neurons on the fighting. As someone who really does not like the idea of min-maxing economies or build orders in strategic games this comes as big relief and I can spend more time watching vikings and saxons wack each other.

What I wish for the future- I expect the developers add a rotating camera and allow cinematic mode to be activated anywhere in the map and not only to units, I can see a lot of cool screenshot potential here. I also hope they allow for some mod support to see what the community does with its systems. UI improvements for unit abilities would also be helpful.

I don’t doubt this game will be successful amongst those who love a really good and well-polished real time tactics game so hopefully we will see more content come to it in the future.