In my untimely quest to build everything Portugal in all videogames I play, Red Dragon was next on the chopping block. What follows is a personal effort to re-create today’s Portuguese Armed Forces based on information from wikipedia. Of course not all units exist in the game so some concesions had to be made. The deck is also extremely unbalanced and makes no competitive or logical sense. It was made for the fun and giggles and to be enjoyed in skirmish. As soon as I am able to obtain the DLCs for this game I will be trying to create the Portuguese Armed Forces during the Colonial Wars of 1961-1975. Let’s begin! 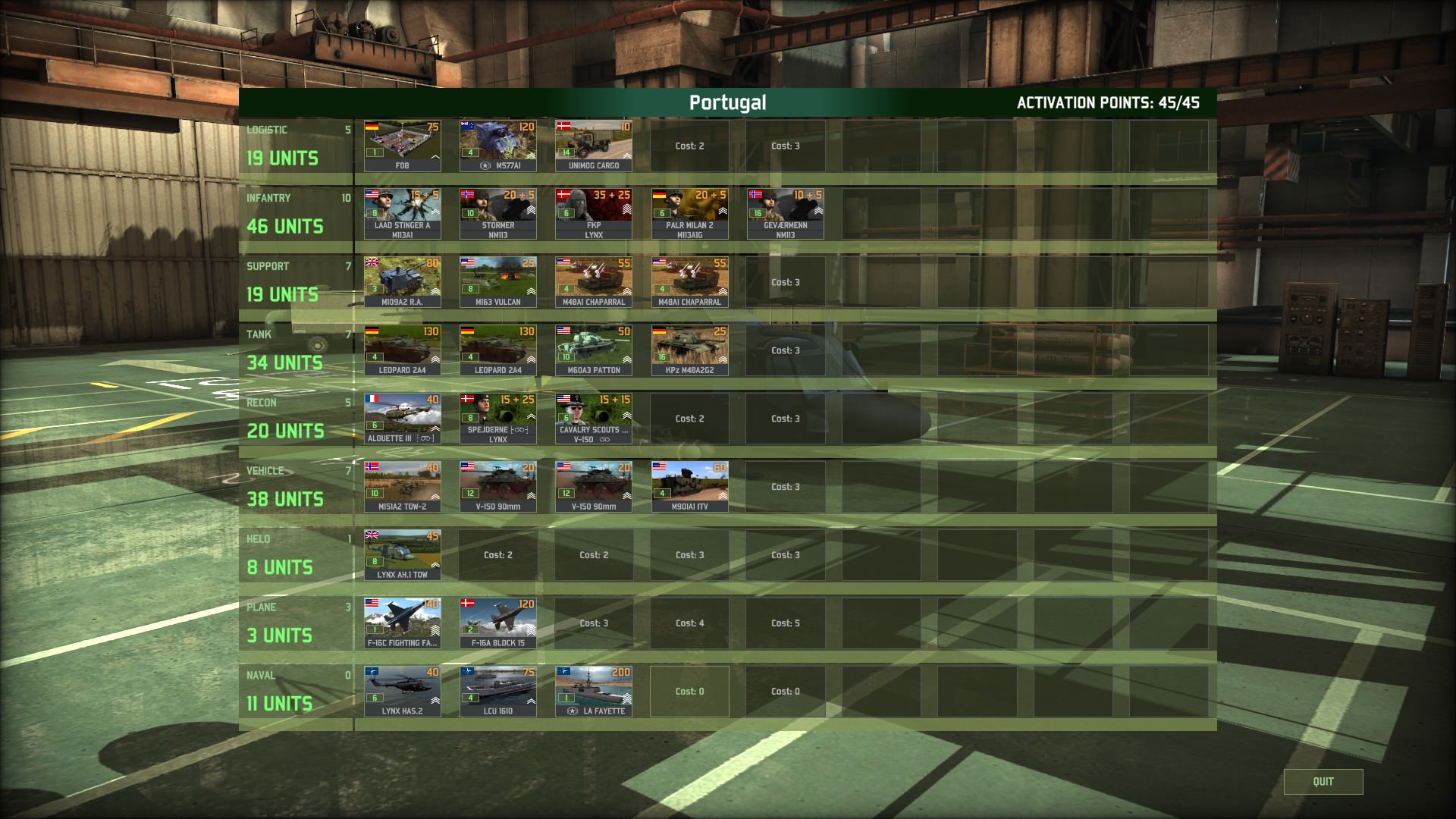 When it comes to logistics all FOBs are pretty much up for grabs. But both the M577A1 command post vehicle and the Unimog are an integral part of the Portuguese Armed Forces. The Unimog is ubiquious, whenever you see portuguese soldiers you are sure to spot one nearby. 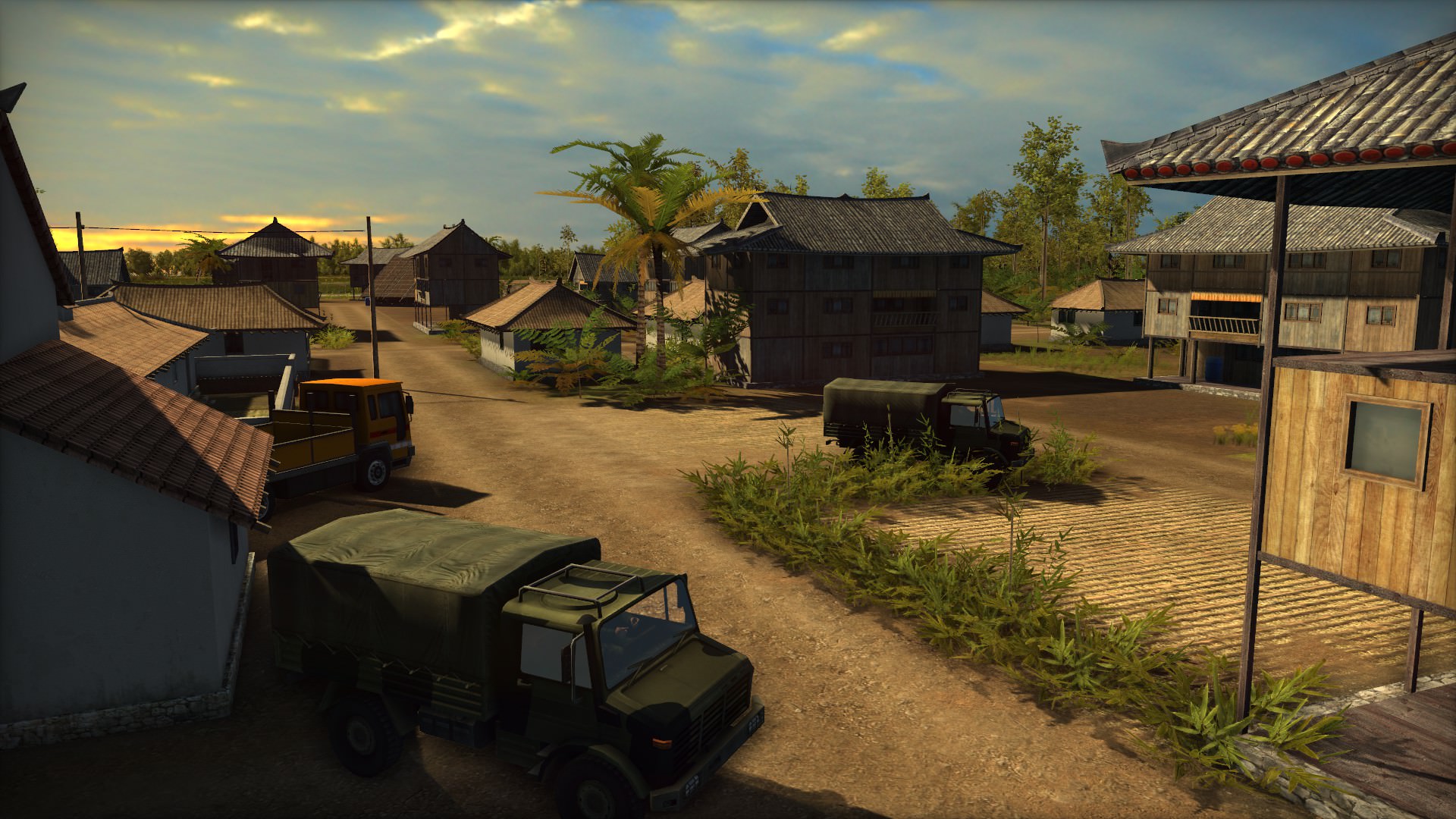 The Infantry section is mainly based on two things: What weapons the game units carry and in what vehicles do they ride on. I looked for the perfect combination of: G3 rifle, V-150 or M113A1G as transportation and the Lynx helicopter. My favourite of these units are indeed the FKP being airborned by the Lynx transport helicopter, equipped with the M/85 assault rifle, the Carl Gustav M3 rocket launcher, their greenish camo and the extremely marine-ish look bring back the imagines of the Corpo de Fuzileiros (or Portuguese Marine Corps).

Some of these units, mainly the american ones could be replaced by the Bison carrier MAW from Canada,

The support class is extremely straight forward. the Portuguese Army is equipped mainly with the british L118 light gun that came to replace the italina OTO Melara (discontinued) but still used for exercises.

The world war 2 era M101 howitzer gave way to the more advanced self proppeled artillery, the M109A5. For air defenses they make use of yankee made Stinger, Chaparral and the bullet spitting M163 Vulcan.

In-game the closest one can come to re-create those compositions are by using the M109A2, the M163 Vulcan and two cards of M48A1 Chaparral. When it comes to in-game performance they are really not that good from my personal experience.

Up next are the armoured branch and in-game these are the heroes I use as the main punch. Portuguese have been using the M60 Patton for quite awhile but have recently adquired some Leopard 2A6. Since the game only features a limited selection of Leopard tanks I decided to pick the most recent ones. 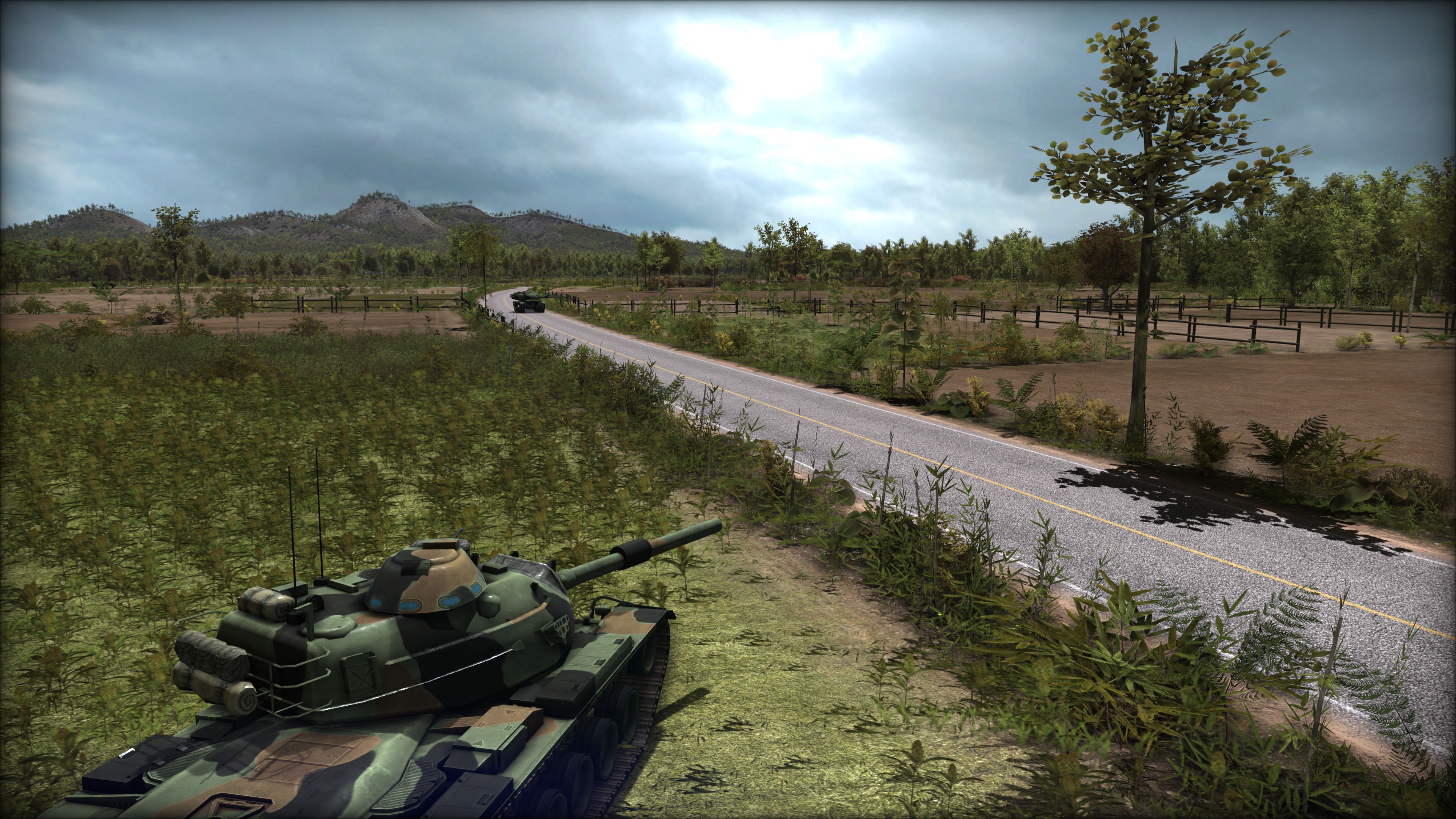 I kind miss that more iconic slopped turred armour look instead of it’s older brother blocky turret type, but hey, we have to make due. So this line-up basically consists of two stacks of Leopard 2A4s, one M60A3 Patton and the Kpz M48A2G2. The idea behind this is to have enough options. We also need some fun in this. Otherwise the game would only let me select 3 cards instead of 4. 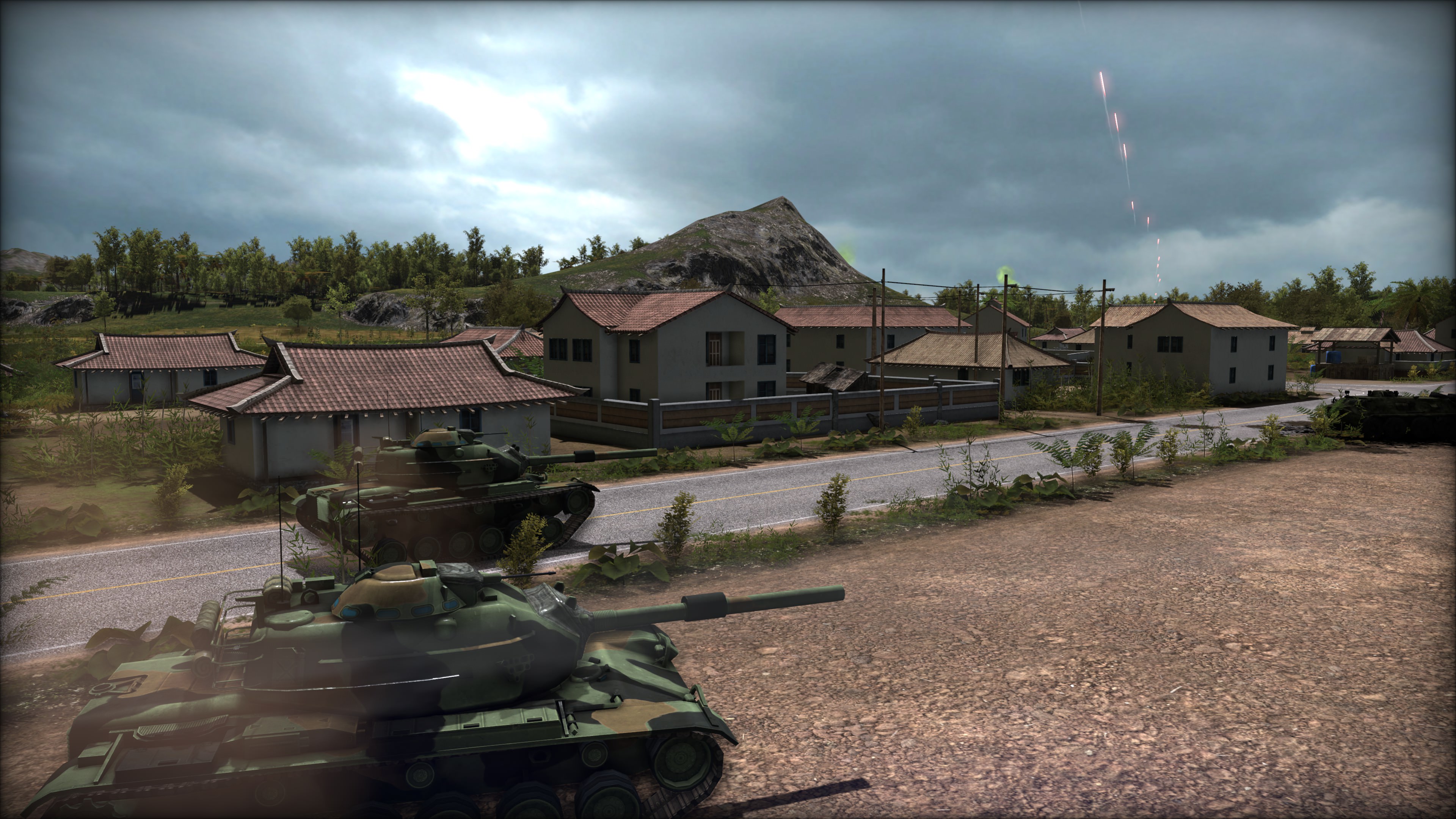 The reconossaince tab brings to the table the most exciting and portuguese unit of them all! The Chaimite! Thing is, the Chaimite is a portuguese developed and build Armoured Personel Carrier and it is extremely similar to the american built and developed V-150. In fact, the Commando V-150 equipped with a 90mm is still used in the portuguese armed forces to this day. Take a look at the V-200:

Now a look at the Chaimite.

While the game does not feature the Chaimite per se, it features the V-150 in it’s recon troop transport variant. That vehicle, together with another Lynx unit and the Alouette III make for the back bone of this portuguese reconassaince force.

The overall vehicle class is composed by the M151A2 TOW-2 jeep, by two cards of the V-150 90mm Armoured Car and the armoured vehicle ATGM’s launcher M901A1 ITV.

The debatle unit would be the M151A2 that could be replaced by something that is more similiar to the portuguese used Panhard Véhicule Blindé Léger. This is very hit and miss. 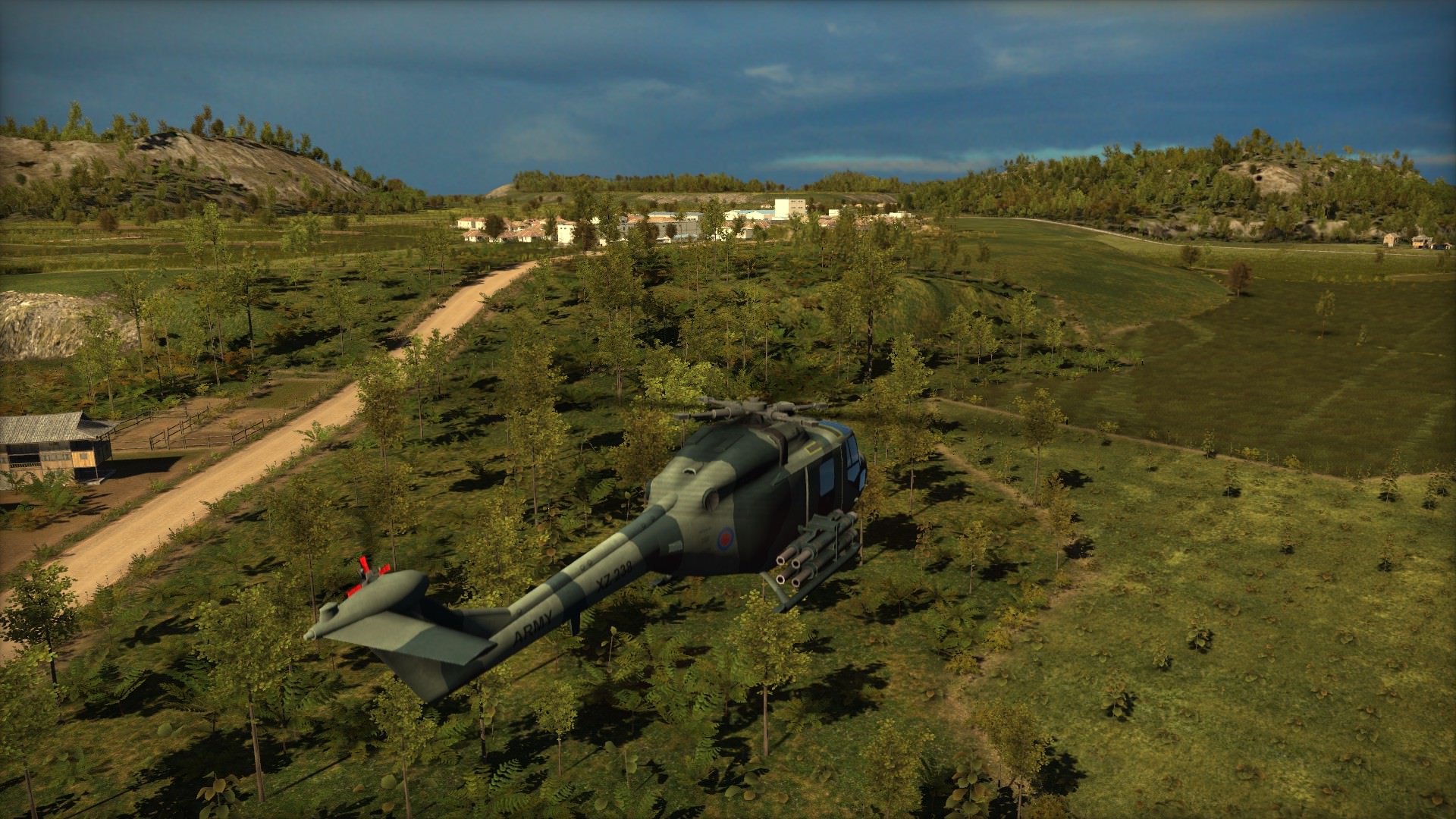 The Lynx makes another appearance in this list and it is the only unit to show up in the Helicopter categorie. I decided on the Lynx AH1. TOW for no particular reason but i’m very much inclined to go for the 20mm cannon version due to the fact that it can provide a better ground support against infantry.

The air force is actually very well represented by the F-16C Fighting Falcon, Portugal has about 30 of those and then to represent the basic version of the F-16 is the A Block version, the air force has 5 of these.

The navy is just an overall “filler” tab with units reassembling the portuguese ones mainly in armament than anything else. The Lynx shows up once more, the LCU 1610, the Fayette, the Command Squad with a bison mainly because it looks like a Pandur and the fremantle which is similar in armement to some light portuguese ships.

If you want to learn more about the portuguese armed forces you can check out the wikipedia page on it’s History, composition and operations.